Today I was ashamed to see that somebody, an edito… 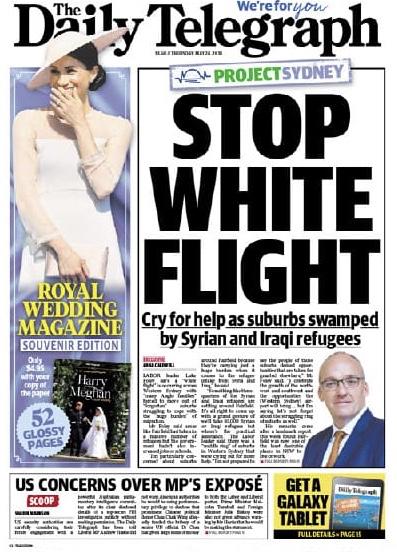 Today I was ashamed to see that somebody, an editorial bigot with a moral compass pointing somewhere between right nationalism and Donald Trump made the front page.

I mean who writes this garbage to the nation? Brainwashing our children and us with drip fed racism.

In the article underneath the very obvious subheading listing two of the most war torn countries on earth it states that ‘migrants are to blame for the decline of poorer suburbs.’

Do you seriously think these poor people, many of which have faced persecution, rape, death and torture, who have come here over land and sea to find some kind of safety want to be labelled like this?

These people are human beings, they are someone’s father, mother, sister and brother. They are running away from the worst the world can deliver.

Risking their lives, seeing their children drown and leaving behind everything they ever had or knew. Only to find that when they do arrive and reach out the hand for help. They pick up the newspapers or turn on the TV networks who throw stones at their already bruised self worth.

The media should be ashamed of itself and anyone who buys this trash should hang their head in shame. I’m disgusted by this and it’s about time we stood for what’s right